Maritime Exhibit Area
The 51st Florida Seafood Festival has completely reworked the existing Maritime Events. To the new Maritime Exhibits Area and moved it to near the small stage and Large chair. This year the Festival has invited Marine labs and Exhibits that are hands on and educational for all ages. Learn about the ecosystem that makes Apalachicola bay so special. Also Meet local wildlife up close. Learn about how the Hardworking Fisherman of this community earn their living by demonstrations and educational exhibits. Certainly fun for the entire Family. Oyster Eating Contest
At most events the early bird gets the best seat. Not necessarily so at the Apalachicola – based Florida Seafood Festival oyster eating contest. Front row and center can sometimes be less than appealing. You see, the object of this contest is to see how many oysters can be consumed by contestants during a 15-minute span. This is not casual pick an oyster from the shell and put it on a cracker competition. The oysters are guzzled. The big, juicy, slightly salty oysters are shucked in advance, counted, and placed in paper cups. Combatants then shovel them down. The only rule is that they must stay down. Contestants have been known to disobey this prime directive. A dozen or more men and women usually compete in the Saturday mid-day event which draws thousands of cheering spectators. Some of the more competitive eaters consume more than 250 to 300 oysters during the competition. Oyster Shucking Contest
Prior to the Florida Seafood Festival’s oyster eating contest is its equally famous oyster shucking contest. Don’t blink! This event happens so fast that the judging takes longer than the actual event. The fastest shucker isn’t necessarily the champion. Each gloved, oyster knife wielding contestant stands poised over a tray filled with 18 of the World Famous Apalachicola Bay Oysters. Often within two minutes a pair of hands have flown into the air – signaling completion. Others continue to be timed. When all contestants have completed their chore the judges take over. Mutilate a succulent Apalachicola Bay oyster and get off stage – you’re through for the day. Nick it, leave unsightly loose shell, or commit one of a dozen other dastardly deeds and penalty time is added to your score. In addition to prizes, the Florida Seafood Festival champion goes on to compete in the national oyster shucking championships. Festival Parade
The Seafood Festival Parade begins Saturday, at 10 a.m. EST and winds eastward down U.S. Highway 98 to the Apalachicola River. The parade annually features bands, floats and dignitaries from throughout the region. Always a treat for the kids, the parade is a colorful and festive way to begin your day in historic Apalachicola. Click here to download a parade participant application Blessing of the Fleet
One of the most colorful events held each year during the Florida Seafood Festival is the Blessing of the Fleet. It is staged at Battery Park on Friday afternoon. Several clergymen, joined by King Retsyo and Miss Florida Seafood, bless the parade of passing fishing, shrimping and oystering vessels as well as the recreational vessels from across the country that have jammed the marina. 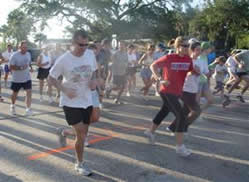 Redfish Run
The historic (1907) Gibson Inn at the foot of the John Gorrie Bridge is the starting point for the Florida Seafood Festival’s RedFish Run. The 5000 meter (3.1 mile) road race then winds its way through the streets of the charming 165 year old city on the banks of the Apalachicola River and Bay. Registration starts at 7:00 a.m. and the event starts at 8:00 a.m. on the Saturday of the Festival. Blue Crab Races
The Blue Crab Races returned to the Festival 7 years ago after many year absence. Last year the Crab Races were revamped to include more kids. Now up to 20 can participate at a time. The Races are held at the top of each hour from 1pm to 5 pm on Saturday of the Festival. It is free to any children up to age 12 with prizes for everyone who Participates thanks to its Sponsor Fisherman’s Choice. It is fun for the whole family make sure you sign up as soon as possible as the slots fill up fast. We provide the Blue Crabs and the fun. Arts and Crafts Exhibits
The Festival has up as many as 90 arts and crafts booth that attend each year with everything having to be hand made in someway. The booths take up the largest portion of the park as the booths are lined up in the beautiful Battery Park. Fresh Florida Seafood
The Food Row area of the Festival is something of a seafood lovers paradise from Fresh Oysters on the Half shell to Smoked Mullet and Everything in between if it is caught in our local waters you can find it here. All the seafood is sold by local Not for Profit groups to benefit their organization they include churches, schools and civic organizations. Caught Fresh , Served Fresh. The Festival has also other non seafood items on food row to satisfy any Festival goers appetite.

Carnival
The south end of the Festival grounds is the location of the Large Carnival with many different types of rides and games to keep you busy for hours.  Each year the carnival provider has brought more and more rides and games for the community to enjoy. Musical Entertainment
The Festival has many musical acts throughout the two day event . Starting around noon on Friday till the park Closes and then again on Saturday. Saturday is headlined by a Country Music Star at 8:30pm.